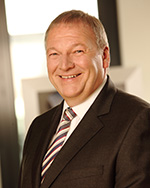 Member of the Board of Directors
NORD/LB Luxembourg S.A. Covered Bond Bank

Thorsten Schmidt has been working for NORD/LB Group since 1983 and is regarded as a proven expert in capital markets. After graduating from school (Abitur) in Braunschweig, he began a vocational training at Norddeutsche Landesbank Girozentrale in Hanover in 1983.

After his vocational education his path took him from Braunschweig to Hanover where he took the first steps in the international capital markets business. In 1987 Thorsten Schmidt decided to move again – this time to Luxembourg. He has been working at Norddeutsche Landesbank Luxembourg S.A. since then. He took the opportunity to get to know the capital market business in a multinational environment. Starting in 1996 he carried out various leading positions with increasing responsibilities.

As head of Financial Markets he successfully controlled the framework set by earning targets and market price risk limits. Due to his proximity to the market and his network within the group he has a good eye for new business initiatives which complete the existing offer. Among other things he was the driving force to establish NORD/LB Covered Finance Bank S.A. in 2006. The bank’s core business – generating additional covered refinancing for the NORD/LB Group – will be taken over and expanded by NORD/LB Luxembourg Covered Bond Bank.

In 2010, Thorsten Schmidt was appointed to the Board of Directors of Norddeutsche Landesbank Luxembourg S.A. With the departments “Financial Markets” and “Loans” his scope of responsibility covered for the majority of the banks activities. In addition he was appointed to the board of NORD/LB CFB in 2012 and occupied the role of Deputy CEO. Thereby he was responsible for the covered bonds business.

As of 1 January 2017, Thorsten Schmidt's area of responsibility has expanded further with the topics of Human Ressources and IT. Member of the Board of Directors
NORD/LB Luxembourg S.A. Covered Bond Bank

Member of the Managing Board of NORD/LB Luxembourg S.A Covered Bond Bank since 2017.

After graduating from high school in 1980, Mr Borchardt commenced an apprenticeship at the Bank für Gemeinwirtschaft AG in Lübeck. He has worked for Norddeutsche Landesbank Girozentrale since 1990. Here, Mr Borchardt progressed from the position of Loan Officer in Hanover to Senior Department Head for the entire Customer Division in Schwerin.

In 2003, he was made Head of the Restructuring Department at Braunschweigische Landessparkasse (BLSK). From there, he took up the position of Managing Director of KreditServices Nord GmbH in 2007 and in 2009 became head of the newly created division BLSK Process Management as BLSK. As of 2015, Mr Borchardt has been a Member of the Managing Board of BLSK and Head of the BLSK Corporate Customers and Process Management Division.

In the year 2017, he was appointed to the Managing Board of NORD/LB Luxembourg S.A. Covered Bond Bank where he spearheads the business of NORD/LB CBB together with Mr Schmidt.

Direct way to us